Specifying blood type when seeking a kidney donor is a mistake.  Let's debunk the myth that you need a donor with the same blood type in order for you to receive a kidney transplant.

So you don't need a donor with the same blood type.  You just need a donor willing to donate their kidney so that you can receive a kidney, albeit from someone else in the KTC.

1. A donor with any blood type can provide a kidney so that their intended beneficiary receives a kidney, just not necessarily the donor's kidney, but a kidney nevertheless, just one from someone else who donates a kidney to benefit some other recipient or for anyone without specific direction.  That's done via a KTC facilitated by one or more hospitals or by the National Kidney Registry ("NKR").

2. Specifying a particular blood type can eliminate significant portions of the donor population who might think that they can't help the intended recipient because their blood type is different. The fact is, though, that through KTCs persons with a different blood type can donate so that their intended beneficiary does receive a kidney transplant.

3. There are 8 blood types, with the following prevalences: 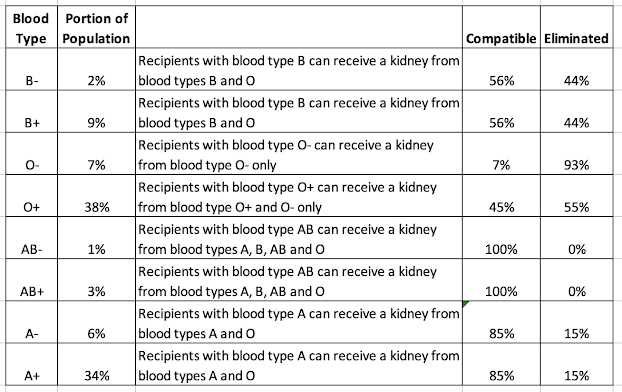 If you're B, and you specify B or O, you're unnecessarily eliminating 44% of the population.

And any A recipient can accept A or O, and that's 85% of the population.  But it's not 100% of the population so why eliminate even 15% of the population?
Get Educated:
For a quick education about living donation, Basics of Living Donation by Explore Transplant, a national consortium of the leading experts in transplant and health literacy, who work to ensure that transplant patients and living donors can make informed treatment choices.


"Living Kidney Donation: What You Need to Know"
from Am. Soc. of Transplant Surgeons on Vimeo

What if A Prospective Donor is Not a Compatible Match?
Hospitals that participate in the National Kidney Registry, and other hospitals, can facilitate a kidney swap where a willing but incompatible kidney donor  wants to help a particular patient who has an incompatible kidney.

Such swaps are called Kidney Transplant Chains.  Such chains involve a pool of patients where each patient is paired with a donor willing to donate but who is incompatible because of differences in blood type or other tissue sensitivities.  Kidneys within the exchange are swapped among incompatible pairs to allow for more transplants.  That arrangement increases the number of transplants dramatically.  That saves many lives, and it could save my life. 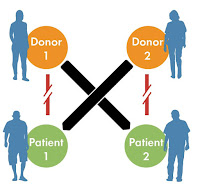 Posted by Ellis Mirsky at 11:51 PM No comments: